Boatbuilding in the recession

The financial woes of the world have had serious impact on the leisure marine industry. Many professional builders have gone under. Builders and stockists that held large inventories and expected them to sell as in past years found their yards full and order books empty. The result of shrinking or disappearing disposable income has been most families having to rethink how to spend the few spare dollars that they have.

I have noticed that this has changed the thinking of many people. Whereas previously most would buy a professionally built boat and work longer hours to earn money to pay for it, the change to less employed hours and less income has meant that many are re-discovering the joys and benefits of hand-crafting for themselves. More time is available to enjoy the satisfaction of personally building a boat that is capable of doing what we dream of doing with it, whether it be drifting down a river, lazing on a lake or lagoon, or even for crossing oceans. More people are building a wide range of boats for themselves.

When I first noticed this trend many months ago, I mentioned it to Matt Murphy of Wooden Boat Magazine. He said to me that amateur boatbuilding really came into its own during the Great Depression and that we were probably witnessing a repeat of that process. He was correct because our orders for plans have continued at a more-or-less steady pace through the past year or two. We have had flat spots at times that have caused concern but, on the whole, our supporters have stayed loyal.

It has been interesting to watch the changing trends in design choice through this period. Initially there was an almost total stop in larger boats and dinghy building increased. The dinghy orders have continued at a slightly reduced level but the trailer-sailers and small cruisers or racers followed. A few months ago the big boats seemed to kick back in, with orders for designs in the 45-60ft range but the mid-size range remained fairly flat. More recently the 30-45ft range has also come back to life.

It was also interesting to see the changes in distribution of orders, which probably followed the changes in financial fortune around the world. The first market to drop off was North America, followed by Western Europe then Eastern Europe and Australasia. The market that has stood up best throughout the process has been Russia and other ex-USSR countries. Recently we have seen an increase in orders for a wide range of designs from most parts of the world.

The designs that continue to dominate our orders are the radius chine plywood Didi range, primarily the Didi Mini and Didi 26performance designs. On the cruising side, the Cape Cutter 19 and Cape Henry 21 lapstrake plywood designs are our biggest sellers. 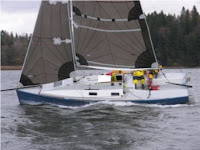 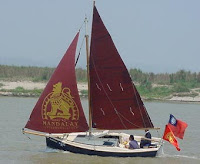 It seems that amateur boatbuilding is enjoying a healthy revitalisation. I think we might see this trend continue for a few years.

You can see our full range of designs at the Dudley Dix Yacht Design website.

Dudley
Posted by Dudley Dix at 10:22 AM No comments:

Phil Harvey and I worked together to design the DH550 cruising catamaran. It was for a personal boat for Phil, his wife Laura and their children. Phil is a professional boatbuilder and built up a yard in Cape Town, run jointly by Phil and Laura, where they built a range of composite production monohulls and custom catamarans. Eventually they opted out of the business world and went cruising.

A growing family led to them needing a larger boat, so they approached me to design their next boat. They had seen my radius chine plywood boats for years, including racing against me and "Black Cat" on Table Bay and offshore around Cape Town. Phil wanted to build a large cat using this system. The features and level of detail that we supply for the radius chine plywood designs take a tremendous amount of time to draw, much more than an equivalent composite design. I did not have the time needed to do such a design by myself, so Phil agreed to work with me long distance, to design the boat together.

Phil built his boat in Trinidad and named her "Wild Vanilla". She is a very pretty boat with lots of space and comfort. Phil, Laura and family have cruised much of the Caribbean on her and are currently in Grenada. 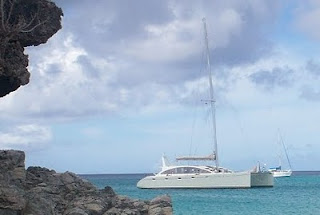 Phil and I intended to continue the line of DH catamarans down into smaller sizes and started work on the DH470 as the next in the line. After long delays it became clear that Phil's life is filled up by family and other interests, so he did not have the time needed to work on the cat design projects. Reluctantly, Phil stepped out of the process and involvement in the future designs. He remains available to advise builders when needed for the DH550.

I have gone forward on my own with the 47ft smaller sister to "Wild Vanilla". The design is now named the Dix 470 and we are ready to start selling plans for her. You can see the Dix 470 here. I will continue to work on this range of designs when time permits. I think that the next in the range will be about 43-44ft.

I propose to expand the range down into the 35-40ft range as well but that will need some changes to the concept, to make it work visually. I will let the design problems work themselves out in the back of my mind and eventually a good concept will come to the surface.

View our complete range of designs at our website.

Dudley
Posted by Dudley Dix at 8:30 AM No comments:

Hi to all and welcome. I am new to blogging, so it may take some time for this to start running properly.

Our new blog will probably replace the newsletter that we used to send out. Time needed to prepare a decent newsletter has proven a problem for a long time. With a small office, just my wife Dehlia and myself, it is more important to keep customers happy with prompt and efficient service than to keep an up-to-date newsletter, so the newsletter somehow always found itself pushed into the "to do" pile and never finding its way to the top.

At the same time, it is good to keep the world informed about what we are doing. I guess that we have been lucky that so many people are prepared to dig deep in our website to look for what is new and we are thankful to all of you for doing that to keep yourselves informed about our activities.

So, from now on, I intend to post onto this blog any news of our new designs and happenings, as well as anything else that may be of interest to our followers and supporters. It may not always be about boats and sailing, it may occasionally also cover my other great passion of surfing (no, not surfing the web but surfing ocean waves). I have surfed since I was about 15, so for 45 years. It keeps me fit, wet and out of trouble (mostly).

If you don't know me or my designs, please visit us at  Dudley Dix Yacht Design .