COVID-19 has prevented the normal fanfare that goes along with the launch of a new boat, fanfare that is particularly nice to have when it is the prototype of a new design. So it is with the beautifully-executed build of the 27ft sportfisherman of Kevin Agee's. We slipped her quietly into the water last month to mark flotation ahead of painting her anti-fouling bottom paint. As it was she floated perfectly as expected but it is always nice to get confirmation when that can be done.

On that first wetting the motor was started but no sea trials. She came back out of the water on her trailer and went home for painting.
Two weeks later she went back into the water with her bottom painted, this time to run in the motor and do some early trials.

The 300hp Suzuki 4-stroke motor is very smooth and suits her well. The water in the river was smooth but it is all no-wake zone, so we idled along the channel. Once out into the mouth of the river the water lumped up quickly from the strong winds in the bay. While running in the motor she did 18 knots with the maximum 3000rpm permitted. After her running in was completed Kevin took the motor up to 4000rpm and 26 knots. With short 1-2ft wind chop she has a soft and dry ride, upwind and downwind.

Last weekend we went fishing, with the opportunity for more trials on flat water. She shows predictable handling, cruises comfortably at 25+ knots and tops out at close to 40 knots.
The weather was good but the fish weren't keen to come aboard. We landed one red drum of about 40lb, which is a protected specie. It graced us with a photo opportunity, then went back to where it came from.
Overall, "Dedication" performed to expectation, with no unwanted surprises. Owner/builder/skipper Kevin is very happy with handling, performance and fuel consumption. She is attracting attention wherever she goes, as well as good comments.

I will build a web page for this design in the next week or so, as time permits. Until then, see our other designs on our main website or mobile website.
Posted by Dudley Dix at 11:02 PM 7 comments:

Exocetus Marine in UK develops and supplies kits for our radius chine plywood catamarans, with kits produced for the Dix 470 and DH550 cats. A kit is currently in development for the new Dix 430 catamaran. The kits are very comprehensive and can be customized to each customer's needs, from basic bulkhead kits through to inclusion of whatever equipment and materials the particular builder would like to be delivered in the shipping container with the pre-cut plywood and other timber.

I have written about the Exocetus Marine kits in earlier posts on this blog, from when development first started in 2012. They have come a long way since then, under the expert hand of owner Kevin Bream.

The DH550 catamaran "Valerie", built in Durban, South Africa, and in charter service in the Seychelles, was built from a very comprehensive kit supplied by Exocetus Marine, which included solid timbers, epoxies, engines, hardware, electronics, porthole frames etc.
The Dix 470 catamaran "Marram", being built in Australia, is a big amateur project. The components have all been cut from CNC cutting files developed and supplied by Exocetus Marine.
Exocetus Marine is now expanding their range in a new direction. This harkens back to my origins in radius chine plywood designs with my Didi 38 prototype "Black Cat", which has spawned a large and expanding range of designs from 15ft to 55ft, spanning both monohulls and multihulls. The Didi 38 design itself expanded to the Didi 40cr and, most recently, the Didi 40cr2. It is the Didi 40cr2 that is the newest project by Exocetus Marine.
As with their catamaran kits, Exocetus is developing a very comprehensive kit for this first expedition into monohulls. In doing so they have transformed my CAD drawings into a complete 3D model before extracting the components for cutting by CNC then testing for accuracy of build. In doing this they are building the boat as well, enabling preparation of complete building instructions to guide those who will follow to build the Didi 40cr2 for themselves.

These photos are a few from the build record to date.
Check back to this blog occasionally. I will update here on progress of the kit development and the construction of their boat.

For more information on our designs go to our main website or our mobile website.
Posted by Dudley Dix at 10:42 PM No comments:

Adventures of the Dix 38 Pilot "Spailpin"

In December last year I wrote about the voyage that was being undertaken by Barry Kennedy in his Dix 38 Pilot "Spailpin" to Antarctica, their second in a year. Read that post here. Since then a lot has happened. If you think that you have had it tough on land through the COVID-19 pandemic, you may change your mind after hearing Barry's story.

The photos below show some of the incredible scenery that they visited. Barry was not alone, he had two crew with him. Together they visited places and had experiences that very few people in the world will ever appreciate. It takes much hard work and dedication to get to these places and very few boats manage to receive permits to even go there.

This time the weather was much more mild than the previous year. But it is a very dangerous place and the weather can turn very fast, changing an apparently safe anchorage into a deathtrap. That is when an able boat and capable crew combine to bring all involved back to safety. Always being aware of every aspect of the surroundings, i.e. terrain both above and below water, ice and weather is imperative to certainty of completing the cruise plans and getting home again.

Even the most carefully laid plans can go wrong, for totally unexpected reasons. It was on the voyage back from Antarctica that exactly that unexpected situation dumped itself on, not only "Spailpin" and her crew, but on the entire world. They sailed from Antarctica to Tierra del Fuego, then to South Georgia. From there the next stop was to be Tristan da Cunha, approx. 1450 nautical miles away. They arrived there to find that COVID-19 was hammering the world and everything was shutting down. That included Tristan da Cunha and they were not permitted to land, despite having been at sea in the most extreme of self-quarantine conditions for a month, with zero chance of having contracted the virus.

So, they headed back out to sea, target Cape Town, South Africa, another 1500 miles away. But two days after leaving Tristan South Africa closed down, shutting off that option. They changed course for Jamestown on the island of St Helena. After being in the Southern Ocean for more than a year this leg can be a bit of a doddle through or around the South Atlantic High but 1300 more miles to get to a destination that they did not want.

They arrived off Jamestown to another closed port. One of the crew needed to return to Cape Town and was allowed to go ashore on St Helena through diplomatic intervention. He was to fly to Cape Town while "Spailpin" voyaged further, next stop Georgetown, Ascension Island. This was to be a relatively short hop of 700 miles but ended the same way. Barry was able to go get fuel before they coninued on their way, now headed for USVI in the Caribbean.

By then Barry was urgently needing to get back to work, so flew off to take care of that while his crew sailed "Spailpin" from the Caribbean to Chesapeake Bay, where she is now in Annapolis, MD. 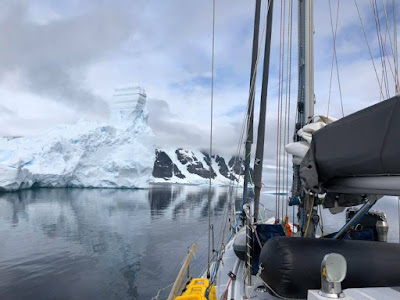 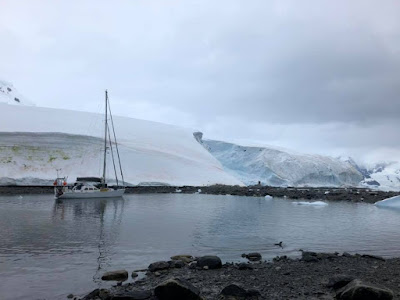 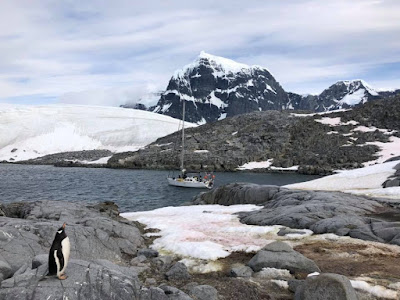 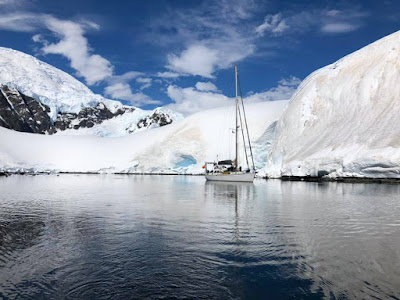 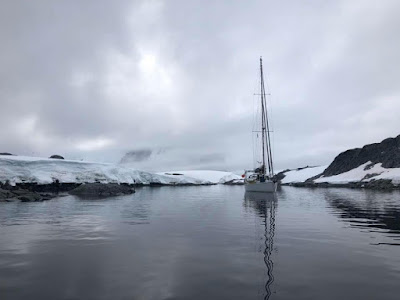 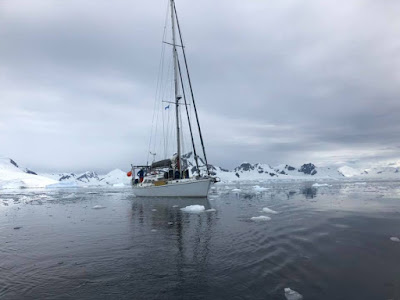 Barry needed to move up to a larger boat for his future voyaging and contacted me before this recent voyage to ask if I knew of a suitable candidate built to one of my designs. No suitable boat was available but he has found a boat from another designer and bought it. That brings "Spailpin onto the market at a very attractive price for a quick sale. There can be no doubt that this boat is well-proven for voyaging to the harshest oceans on our planet. If you are interested in buying her, contact me by email so that I can put you in contact with Barry.