We have a new design that is a little out of the ordinary, named the Didi 29 Retro. It is a development of the Didi 26, which is one of our most popular designs with more than 250 plan sets sold. It has the same basic hull, keel options and interior arrangements but that is where the similarity ends. I think that, with the two boats lying next to each other on a marina, few people would realise that they are blood sisters. 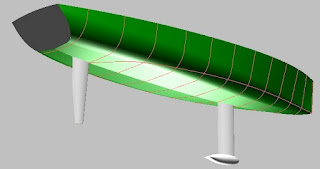 This boat is intended for classic sailboat racing, so it needed a classic appearance. To this end we have:-

1) Extended the aft end into a counter stern. This will weigh a bit more but it extends the sailing length, for higher speed potential in stronger conditions.

2) Cropped the forward end to form a plumb bow.

3) Added bulwarks, both because it is a classic feature and to add spring to the sheer. The bulwarks are 100mm high in the bow and taper to a normal toerail height aft of the cabin, so that crew can sit comfortably on the rail.

3D Rendering of topsides and deck

5) Replaced the modern fractional rig with a big gaff cutter rig. It has carbon spars to reduce rig weight and increase stability. It is very versatile, allowing a wide selection of sail options, to really pile on sail area in the light stuff and reef it right down to a compact fully inboard gaff sloop rig in strong winds, and many variations between. The bowsprit pivots around the bow and retracts to stow on the sidedeck. The Genoa, Yankee and asymmetrical spinnaker are tacked to the bowsprit, so they can be pivoted up to windward for deeper sailing angles instead of being stuck on centreline. 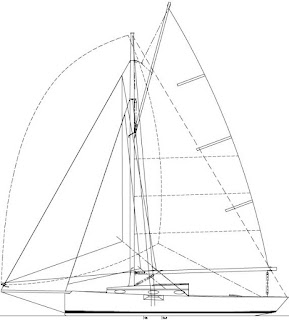 These changes have morphed a very fast modern little racer/cruiser into a traditional racer/cruiser that will be capable of even higher speeds than the original design. It should be extremely quick in light winds and downwind in stronger conditions. The rig is a direct development of the rigs used on the Cape Cutter 19 and Cape Henry 21. Both are surprisingly quick little cruisers in the light to moderate breezes because of their large sail plans, yet are very capable in stronger conditions as well. However, they don't have planing underbodies and the Didi 29 Retro has inherited the planing underbody of the Didi 26, so should go like a witch downwind.

The standard keel options are lifting or fixed bulb keels. The rudder is a cassette that drops through the cockpit floor and locks in place for sailing but can be lifted out for trailing or access to shallow moorings.

The first boat will be built in Hout Bay, South Africa, by the owner. He will use a pre-cut kit of all plywood components, which will be supplied by CKD Boats . Builders will have the choice of building from plans only, plans with full-size Mylar bulkhead patterns or plans with a plywood kit.

For information on our other designs, please visit http://dixdesign.com/ .
Posted by Dudley Dix at 8:33 PM No comments: