The Didi 26 has to rate among our most successful designs. I designed it in 1997/8, so it has been around for about 13 years. In that time we have sold plans for 250 boats, so about 20 boats per year. They have been built by amateur builders on all continents and in far-off corners of the world.

I have no idea how many are on the water because only a small proportion of owners send me their launch and sailing photos. I am very grateful to those owners of our boats who do send photos of the build process and sailing once completed.

The most recent sailing photo that I have received for a Didi 26 was from Bill Richards on South Island in New Zealand. He has sent me a few sailing pics over the past year or two but the new one is very nice, showing his "Panic Knot" at speed under masthead asymmetrical in strong winds. 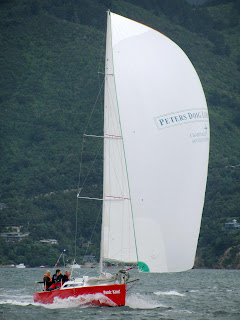 Bill added the following commentary to his photo.

"The conditions where extremely testing with a southerly wind that ranged from 5 knots to 30 knots. So we put up as much sail as we dared and went for it. We did wipe out several times both using the fractional and mast head kites. We tried very hard to break stuff but didn't succeed. max speed was 15 knots in flat water. And everything was under control on a good deep run, unfortunatley the course then called for a reach to the finish so we had to turn and try and carry kite, we managed very well until the gusts built to strong and then couldn't control it, ( the other boats wiped out before us) recovery was quick and I can now prove that the boat has a good righting moment, as we managed to have the mast head kite up and full main up with the top of the mast in the water!

What helped us was that the oppositon were flying conventioanl spinnakers and when they lost it they didn't recover as quickly as us. When we rounded up we didn't ever get as far as head to wind or worse as the oppositon did. The crew didn't even get wet feet as the boat on its side sits very high in the water. There is no chance of any water getting near the companion way.

The photo shows us doing about 12 knots."

We also have a 23ft version of this concept, the Didi 23.