Most of you will have read here or elsewhere about our adventure in the 2014 Cape to Rio Race on the Didi 38 "Black Cat". I have published a book about it, which can now be ordered from our website. For those who don't know what happened, here is a synopsis of the book, which is titled "South Atlantic Capsize - Lessons Taught by a Big Ocean Wave".

At dusk on 5th January 2014, the Didi 38 "Black Cat" was struck by a massive wave on the second day of the 2014 Cape to Rio Race across the South Atlantic Ocean. The wave capsized her in an instant, flinging crew, equipment and food around the interior and destroying most of the electronics with water that entered through the companion hatch. "Black Cat" recovered very quickly but the electrical damage was done. This is the story about the race, the boat, the crew and what happened on that day.
It also explains the principles of stability that control the safety of monohull sailboats, mostly those characteristics that affect the behaviour of boats in large beam seas that might capsize them and the features needed to quickly return them to upright. It does this in words and terms that can be easily understood by non-technical people.
You will also read the story of the capsize of the 64ft "Sayula II" in the Southern Ocean when sailing between Cape Town and Sydney in the 1973 Whitbread Round the World Race, written by yacht designer Butch Dalrymple-Smith, who was one of the crew. Also what one boat owner has added to his own boat to prepare it and himself in case they are caught by conditions that place them at risk of capsize.

I managed to coerce two of the crew to also put pen to paper, to each write a short piece about his experience. I felt this to be important because we all observe events from our particular points of observation and positions in life. My view from the inverted cabin roof of Sean Collins hanging on for his life in the cockpit and of Adrian Pearson flying like a rag doll around the cabin is very different from that of Sean looking down the steep slope of a monster wave and seeing the masthead spearing into the ocean below, knowing that the boat will follow deck-first.  I would have liked to have had stories from the other two crew as well but they did not feel capable of effectively putting their stories into words.

You can buy the book at http://dixdesign.com/articles.htm. We can ship to you wherever you are, at our normal shipping rates.

To view our range of boat designs, please visit http://dixdesign.com/

Posted by Dudley Dix at 1:08 PM No comments:

Every now and then a boat catches my attention and I think "Hmm, I wouldn't mind owning that boat myself". Such a thought crossed my mind when I saw photos of "Day Dream". She is a Didi 40cr, essentially the same as the Didi 38 "Black Cat" that I built and sailed for so many thousands of miles, but with extended stern and a bit more accommodation space.

Fast as "Black Cat" is, "Day Dream" has the potential to be still faster. She has the same very slippery hull but her extended stern increases her speed potential. She has the same powerful but easily-handled rig, with a bit less draft, for better access to shallower cruising grounds.

She was professionally-built in Antalya, Turkey, with CE certification. She has a radius chine plywood hull with fibreglass deck. She was a custom build, so the builder has made a few styling changes from my design but overall the boat looks really nice. I see European influences and features that are fine for local cruising in the Med. With my own preference for ocean voyages, I would modify the navigation and galley areas to better suit my own needs.
The asking price for "Day Dream" is not much more than the material cost of building such a boat, at US$60,000. If I had the cash available, I would be sorely tempted. If she rattles your cage enough to want to investigate further, contact me by email. I will put you in contact with the owner for more information.
To view this and our other designs, visit http://dixdesign.com/.
Posted by Dudley Dix at 10:49 PM No comments:

I wrote in January about the 16ft plywood garvey being built by Kevin Agee. Kevin is progressing nicely and benefitting from the very welcome spring that has finally arrived and eased out the rather brutal winter. Now it is easier to do woodwork and epoxy cures much faster, so work progresses more quickly. Epoxy coatings in the sealed spaces are being completed and this weekend the deck will be glued on. 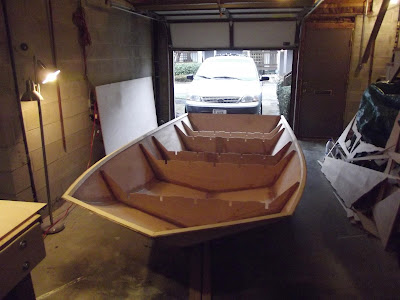 Kevin Agee is doing a nice job of his project and will display it in the "I Built It Myself" section of the Wooden Boat Show at Mystic Seaport at the end of June. If you want to see this boat, that will be the place to do it.

Plans are not yet ready for selling but should be in a month or two. We will offer it as plans and instructions, with options of full-size patterns or a pre-cut plywood kit.

To see our designs for your next amateur project, please visit our website at http://dixdesign.com .