The tale of "Vlakvark", a very cold warthog

"Vlakvark" is a steel Vickers 45AC . She is named for an African warthog but she has spent much of her time in the past two years in the Antarctic. Owned by Stuart Sugden and Charmaine Lingard, this beautiful photo of her appeared last week as Cruising Shot of the Week in Cruising Compass, The Weekly Newsletter for Sailors & Cruisers.

"Vlakvark" was originally named "Tantalus". She was built by Brian Alcock and his team at Hout Bay Yachts, for John and Rose Stockwell. They cruised her across the Atlantic and chartered her for a few years in the Caribbean.

Her next owner renamed her "Sweetwater". She was based on the East Coast and cruised the Caribbean.

That owner sold her to Stuart and Charmaine, from British Columbia, who renamed her "Vlakvark". They wanted a connection to her South African origins, so chose the Afrikaans name for the warthog. They then took their warthog out of its normal hot climate and headed through the worst cruising waters in the world, to the ice. They have done this not once but twice. It seems that she has enjoyed the change and has carried her crew in comfort and safety. Now she is en-route North through the Pacific, heading for her home base in BC, Canada.

The Shearwater 45 came into being via a rather strange route. The Shearwater 39 had proven to be a popular cruiser and soon built a reputation as a seaworthy voyager that caught attention wherever it went. There were people who wanted a bigger sister but nobody would commit by commissioning the new design nor coming up with money to finance the cost of building a plug and moulds.

Eventually my friend Pat Fraser, who had been a professional boatbuilder, came to me with the same thoughts but with an idea to make the whole process more viable with a limited budget. He suggested that we take bow and stern mouldings from the moulds of the Shearwater 39 and set them up further apart, then fill in the rest of a 45ft boat between them. Crazy as it sounds, it was a practical idea, so we ran with it.

I drew lines for a 45ft hull and blended the ends into as much of the 39 as I could use. The result was in many ways a stretched out 39, with only small increases in beam and underbody depth and no change in freeboard. Aside from trimming off the skeg and changing from a transom-hung rudder to an inboard spade rudder, the rest of the hull and deck concept was to stay the same. From a relatively beamy 39 footer, we produced a relatively slim 45.


By that time Nebe Boats, builder of the Shearwater 39, no longer existed. Pat Fraser contracted Fortuna Boatbuilders to build the hull for him. They set up the two pieces of the Shearwater 39 on a frame, I gave them the shapes of the intermediate frames needed, then they built the remainder of the hull with Airex cored sandwich. 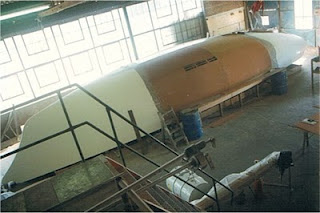 Pat had a partner in this project, his colleague at Manex & Power Marine, Dennis Colclough. Moulds were taken off Pat's hull and Dennis' boat was the first one from the moulds. These first two boats were to be staysail schooners but I anticipated that most others would be cutters and made allowance for it in the design.

These first two boats were fitted out by Pat Fraser and his team in Woodstock, Cape Town. Fortuna Boatbuilders now had moulds for building production boats. Richard Acheson entered at that stage and set up Shearwater Yachts to complete the hulls ordered from Fortuna. Later he was to buy the moulds for both the 39 and the 45, taking over all production.

First boats into the water were the schooners. They attracted a lot of attention, with their good looks and heavily raked masts. However, it was the first cutter to be launched that really attracted attention. Built by Shearwater Yachts, it was a high quality boat, beautifully detailed and it sailed past almost everything on Table Bay. 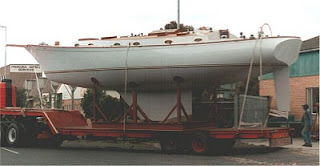 I recall the day that the test sail was done by a journalist from a British yachting magazine. I took a photographer out on my lightweight flyer "Black Cat" and Richard Acheson and the journalist went out double-handed on the 45. I had not yet sailed on the 45 so figured that my 4.75 ton 38 footer would be faster than a 45 footer that displaced nearly three times as much on only 10% more waterline. I set my full mainsail and blade #3 headsail, expecting to have similar speed. Boy, was I wrong.

Most of the sailing was in 8-10 knots and the 45 was slightly faster but the harbour entrance had about 18-20 knots of Westerly. Close-reaching through the harbour entrance "Black Cat" was cooking at 11 knots and I was dumping power from the mainsail to keep her on her feet. The 45 came through my lee, going at least 2 knots faster. They did not even have to drop the traveller to maintain control. They just flew past us looking very relaxed while making us look stupid. That boat has a big sailplan and the stability to just pick up its skirts and go.

Ever since that day nothing has surprised me about the performance of the Sheawater 45. Every sail test that I have seen has remarked on the extraordinary speed and manoevrability, which catches everyone by surprise. Owners have told me how much joy they get out of sailing past boats that look like they should be faster or of surprising hard-nosed racers round the buoys.

Richard took the first boat to the London Boat Show at Earls Court and it also went to the Southampton Boat Show. It received rave reviews but there seemed to be a resistance to buying a boat built in South Africa. The next boat that Shearwater Yachts built went to the Annapolis Sailboat Show, where it received the top awards as Traditional Cruiser of the Year and Overall Boat of the Year. Again it received rave reviews.

Richard received many USA enquiries but they resulted in no sales. He was to find out later from someone highly placed in the USA boating industry that enquiries for the Shearwater 45 were diverted elsewhere. Much as I would like to say more about it, I cannot do so in a visible place such as this. Suffice to say that the marketing effort in USA was killed by vested interest. 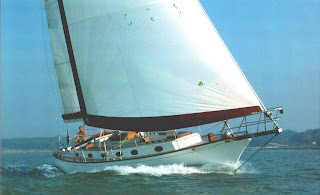 The first boats built by Shearwater Yachts were of excellent quality. The one on the Annapolis Show was so good that the judges were unable to fault it in any regard. Their overall comment was "This is an extraordinary boat". Later, when the wheels started to come off due to financial difficulties, problems started to come in. Owners of these boats had issues to resolve but their boats are now also in good shape.

I have contact with owners of some of the boats but I have lost track of most of the hull numbers. Here is the info that I do have.

Terry Usher of Cape Town has the cutter "Sharyn-Leigh", currently in Florida.

Steve Hunt has his cutter "Maggy May" in the Caribbean and really appreciates her performance and sailing characteristics.

Chris Hull of Cape Town and owner of the Shearwater 39 "Sea Lion" commissioned preliminary design work for a Shearwater 52 last year. He has now decided not to proceed but that work could form the basis of a new design at some stage in the future.

We have a new design, as of today. It was commissioned by Nick Sverkos, of Athens in Greece. He wanted to build the Didi 26 but asked if he could have more space. He particularly wanted more headroom and beam and was not concerned about his boat being a bit more than normal towing width. He set a maximum beam of 2.9m. 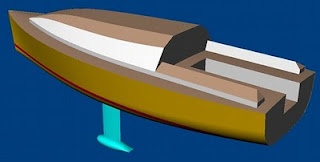 Computers and CAD are wonderful for taking a design and rescaling it to create bigger or smaller clones. In theory they can do all of the work for us and then we print the drawings of the new design. Designing stuff is easy, isn't it?

That is fine if all is scaled up by the same proportions. Open a drawing, tell the program to rescale by the amount you want, adjust here and there for differences in material thicknesses, refit the result to the output paper size then hit print. But!!!!!! Make the proportional adjustment in one of the 3 directions different from the others and  the situation changes completely. Shapes of all sorts of things change in ways that can be awkward. Circles become ellipses, squares go out of square and angles change. To simplify the whole issue I keep the proportional change in width and height the same so that the overall section shape doesn't go out of whack and the structural sections used for stringers etc don't go out of square.

Working with the Didi 26 as the starting point, I blew it up in all directions, more so in width and depth than in length. Next came another 100mm of freeboard, done by extending the hull sides upward without changing the side angle, so the deck became wider and the overall hull shape remained unchanged. After that I added another 100mm of height to the cabintop and adjusted stringer spacing to give a sound structure.

This all ended up as a large amount of redrawing for the structure. After all that the rescaled interior had some oddities, so I reworked that as well to make it work better. Final changes were reducing the cockpit width from the racing type of the 26, adding coamings for comfort and to give cubbyholes for winch handles, ham sandwiches etc, and a saildrive inboard diesel in place of the transom-mounted outboard.

The final result is a boat that will be a nice coastal fast cruiser. It will be light and stable enough for excellent speed, yet still able to get into shallow water. It will also follow the lead of the Didi 26 by being a great club racer. The sail plan is slightly more conservative than that of the Didi 26, yet this boat will still be fast enough for some exciting sailing. 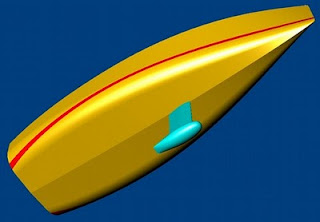