Every now and then I am sent a truely gorgeous photo of one of my boats, which I just have to show off.

Today I received this beautiful one from Tony and Angela Maslin, of their Dix 43HD "Tana Vika". They were sailing in company with Beth Leonard and Evans Starzinger on "Hawk" along the Newfoundland coast. Thanks to Beth for the photo. 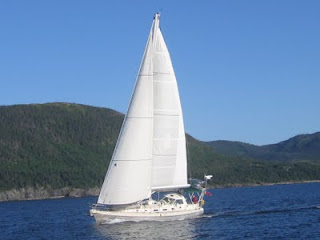 "Tana Vika" was built by Neriede Yachting in Czech Republic. Tony and Angela took delivery at the yard in motor-away state, without the rig. They motored through the rivers and canals of Europe to UK, where the rig was fitted. Since then they have crossed the Atlantic and cruised the Caribbean and East Coast of USA and Canada.

Her construction is aluminium and she was built from a kit that was pre-cut by CNC using cutting files prepared by Robert Christinger of Alumar Yachts.

PS. When Tony sent me the photo he said that they were able to hold "Hawk", a Samoa 47, for the 30 mile beat during which the photo was taken. I didn't initially include it in my blog in case Tony was stretching the truth a bit. Since then Beth has confirmed that the two boats had a great race and were a good match.
Posted by Dudley Dix at 9:48 PM