Bob van Niekerk, the Passing of a Great Designer

Today I received the sad news of the passing of my friend, colleague and mentor, Bob van Niekerk. He will be sadly missed.

Bob was a very accomplished designer and builder, with a history in various industries that included sports cars, powerboats and surfboards. I remember, as a young teenager, watching the Dart and Flamingo cars of GSM (Glass Sport Motors) racing at Killarney, the local Cape Town race track. I have always thought that the Flamingo was one of the prettiest cars ever built and would still love to own one. Bob and his colleagues were a great inspiration to so many people.

Bob was almost unbeatable in offshore powerboat racing. His big offshore racing cats held the top spots for decades and many are still racing and still winning.

He also did a large amount of work with the South African armamants company Armscor. His work with them was designing catamaran patrol boats for harbour and coastal defense. His big coastal patrol boat was too pretty, in my opinion, to serve a military role.

Bob was a contemporary and friend of my parents, living not far from us, waterside, at Zeekoevlei in Cape Town. At that time I was a young child, a long way from choosing my own direction in life and Bob was already an accomplished designer. It was many years later that the two of us were to team up for the design of the 72ft "Sea Princess" ferry and party boat that operates from the Victoria and Alfred Waterfront in Cape Town. 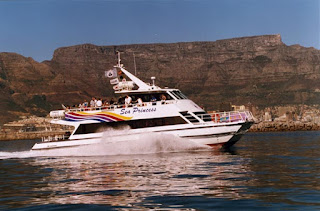 Dehlia, Michelle and I offer our sincere condolences to Laurette and family. RIP Bob, you will be remembered for a long, long time.