This new offshore fishing boat being built by Kevin Agee in Hampton Roads, Virginia, is progressing nicely. It is entirely his build project and I get to do the drawings for it and to help out occasionally at weekends, sometimes offering guidance, other times supplying an additional pair of capable hands. I always return home after a day working on the boat feeling tired but happy with the progress.

Last weekend we did the last preparation work on the framing to receive the bottom skin, dry-fitting the plywood panels from stern to bow, fine-tuning bevel angles on frames, girders, keel and stem in the process. The bottom skin is two layers of 9mm plywood and this post is about fitting the first layer.

Kevin had already done most of the bevel work and dry-fitted two full sheet-lengths both sides, where the sheets fall nicely into place under gravity alone. The further toward the bow that we get, the greater the twist that the plywood must adopt. It doesn't do this readily and must be coaxed by various methods. There is only 3 degrees of change to the bottom angle (dihedral) in the aft half of the hull but there is 51 degrees of change in the forward half. This is to form an efficient planing surface aft, combined with bow sections that will give a soft ride into short seas, so the bottom has to twist to give the characteristics that we want.

The photo below shows some of the preparations that have been made to the structure ahead of fitting the bottom. The large member across the top of the photo is the keel, which has been planed at an angle to match the edge of the frame. There is a shallow saw-cut visible on the top of the keel, which is used, one on each side of the hull, to gauge the correct bevel angle. The intersection of the two cuts also shows exactly where the centreline of the keel is, needed when fitting the bottom panels. The white is a structural epoxy fillet to bond the frame to the keel, easier to do now than in the bottom of the bilge when the boat is right-way-up. The green semi-circle is a fibreglass pipe that has been cut in half and bonded into the edge of the frame. This is to form a scupper for bilge water that may get into the bottom of the hull. Each frame will have one of these scuppers fitted each side of the keel, to lead any water to the transom for draining or pumping. 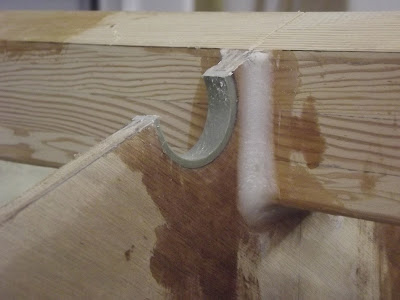 The next photo shows the hull with the aft skin panels dry-fitted and the forward panels fitted on the starboard side and held by clamps. The port side, facing the camera, has the contact surfaces of all structure planed to the angles needed for the plywood to lay flat against them, to maximise the bond strength. Here the rapidly increasing dihedral angle toward the bow shows nicely. 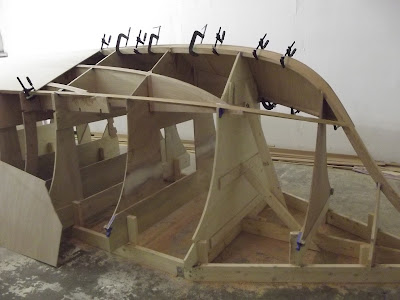 This next one shows the other side of the hull, with the skin panels dry-fitted all the way to the bow. Whereas in the aft half of the bottom full 8ft sheets were used, further forward the sheets must be progressively reduced in length. This is because the longer the sheets the greater the internal stresses built up inside the sheets due to the twist, so short sheets accept the twist more easily. It is not a good idea to scarph all of the bottom panels together then trying to fit them in one piece. First, that single panel becomes very difficult to handle because of the size and weight, so it will need an army of helpers to manhandle it. Second, glue must be applied to the mating surfaces before the panel is finally fitted, so the glue will be an almighty mess by the time that the panel is properly in place. 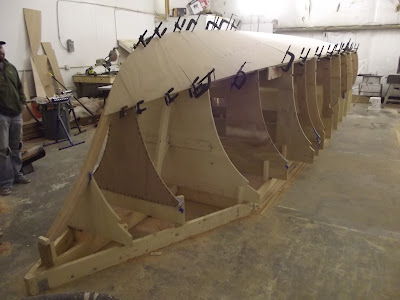 Forward of the two 8ft sheets we fitted the next one as a half-sheet, so a 4ft sheet, which worked well. For the following sheet the 4ft length proved difficult, requiring a lot of clamping pressure to pull it in, so we cut it in half again, down to 2ft lengths. Those worked fine and also showed us how much stress can be built up in the plywood from the twist. Although the two plywood edges are straight when lying flat, the second sheet had to be spiled with a plane to fit against the first sheet, to compensate for approximately 3mm of curvature between the two edges. The 3mm curve is caused by stretching/shrinking of the material in the two panels from internal stresses. Due to the nature of wood, the internal stresses will relieve as the fibres take on a permanent deformation and assume the twist as their permanent form. Lamination of the next layer of plywood will also lock in the new shape.

In the process of dry-fitting the panels they must be trimmed to their final shape. Kevin cut the sheets to shapes that I provided in the form of full-size patterns but they must be fine-tuned along the centreline and chine for a perfect fit. Once that perfect fit has been achieved and the panel is securely clamped, it should have some locating screws fitted, which will assist greatly with getting it back into that exact position when gluing it into place, with slippery glue trying its best to put the panel anywhere other than where you want it to be.

In this next photo the forward sheets of the first side have been glued in place. The temporary screws with fender washers are holding the plywood securely against keel, stem and girders but the clamps have been left along the chine. The strips of plywood on waxed paper across the joints in the middle of the panels are there to align the joints in case some glue has found its way into the joints; we don't want it to glue the edges misaligned. 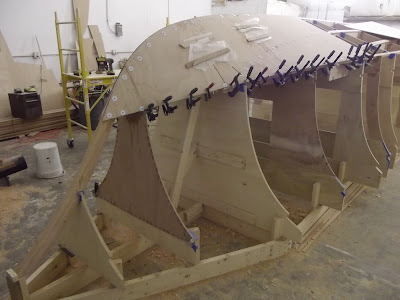 This one shows the forward sheets of the second side glued on. This is when the previously pre-drilled screw holes to locate the sheets become very important. With the opposite side already skinned, clamps can't be used to position the plywood before any screws are fitted. This is a two-person job, with one person holding the sheet close enough to the framing for the first two locating screws to be fitted, then the other screws follow in a logical order to pull the sheet back into its proper position. 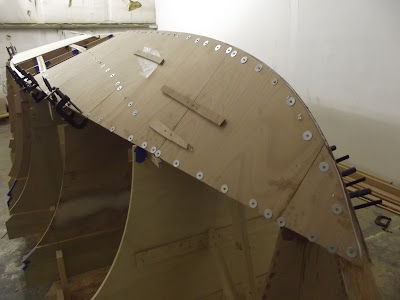 The aft sheets were glued on by Kevin and a friend during the week. The photo below shows the completed first layer of the bottom skin. 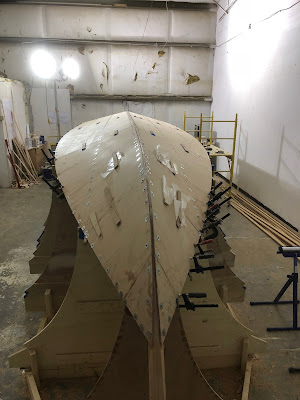 And the last job is cleaning up the glue that has squeezed out of the joints and runs down the structure. It is worthwhile to do this removal of excess epoxy as a matter of course throughout the build. If it is left to be cleaned later then the epoxy will be cured, difficult to remove and likely to break out pieces of plywood in the process. Trimming off when soft will save some hassle later. 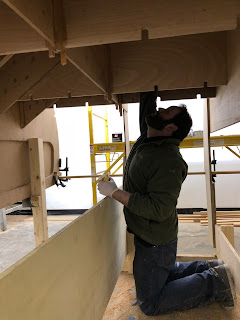 This design is not yet complete, so is not on our pricelist or website. See our full range of designs on our main website or our mobile website.
Posted by Dudley Dix at 11:05 PM